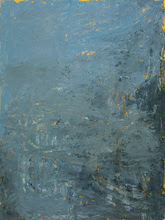 19 reasons as to why it was a Big Spin, not a Big Bang


For the details, please read my "Dark Energy and Dark matter as Inertial Effects" paper on arxiv.org.


Posted by Serkan Zorba at 5:42 PM No comments:

My spacetime-rotation model of the universe (see my papers in arXiv and blog posts here) proposes, effectively, to replace Big Bang with a more "natural" Big Spin which, although its own origin needs to be dealt with, does capably unify, and naturally and physically explain many seemingly unrelated and confusing outstanding cosmological problems: the cosmic inflation, dark energy, dark matter, and the "mysterious" intrinsic spin (angular momentum) of elementary particles, and the physical meaning and origin of Hubble's constant and Planck's constant. Again, please see my original dark energy-dark matter papers on arXiv for details.

Here I would like to share with you something very exciting that I came across very recently about one of the founding theoreticians of the Big Bang theory:  George Gamow.

After I came up with my rotary model of the universe, without any prior knowledge of the literature, in October 2010, I learned from Wikipedia that Kurt Godel had (in 1949) a rotary model of the universe that, although useful as an exercise in general relativity, goes counter to our daily experiences due to its infamous closed timelike curves, allowing time travel into the past and a disturbing possibility of messing up with the causal chain of events, which we don't seem to experience. Furthermore, Godel's model, in general, does not result in an expanding universe, and hence the issues of dark energy and dark matter are absent.

That is because Godel's universal rotation is the rigid rotation of matter, whereas my model proposes a rotating space-time, which naturally produces inertial effects that we, unknowingly, call dark energy and dark matter.

Anyways, at the beginning of this year, I read somewhere online that there is a possibility that Kurt Godel got his cue about a rotational cosmic model from a letter sent to the editors of Nature magazine a few years earlier, in 1946, by the brilliant George Gamow about the possibility of a rotating universe.

I immediately ordered a copy of this paper through our interlibrary loan service. Below I will paste it as a picture. Please take a look at it, and note how my "Dark energy and Dark matter as Inertial Effects" paper does point out the same thing as Gamow mentions, particularly, about the shapes of galaxies and how a rotational universe would naturally explain them. I found this to be very interesting and exciting, and more important, profoundly encouraging. 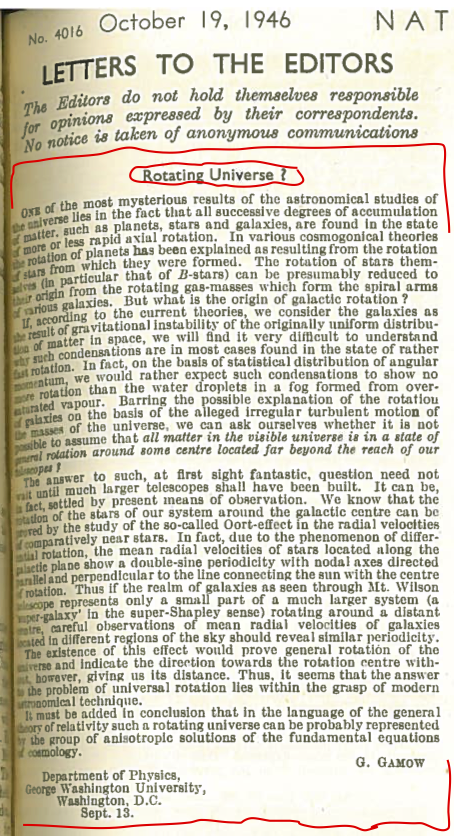 Posted by Serkan Zorba at 1:26 AM No comments:

What is the Origin of Intrinsic Quantum Spin?

Spin quantum number is the fourth parameter needed to uniquely describe the quantum state of a, say, fermion such as an electron. It was originally postulated by the brilliant, albeit caustic, Austrian physicist Wolfgang Pauli. Shortly afterwards some physicists interpreted it as self-rotation. Pauli himself was not happy with this interpretation because a quick calculation shows that such a mechanical supposition requires a superluminal rotation of the electron's "surface," which goes counter to the dictates of the special theory of relativity.

So how is quantum spin explained then? Is there a physical model for it?

The standard answer to these questions is that we are supposed to think of quantum spin as a two-valued intrinsic quantum degree of freedom, corresponding to an "intrinsic" angular momentum, with no classical analog. And the majority of physicists follow this catechism.

When self-rotation so neatly explains the two-valuedness (clockwise-counterclockwise), and the angular momentum aspect of this phenomenon that I do question the validity of Pauli's (and others') concern about the faster-than-light rotation. The special theory of relativity puts a speed limit only on the propagation of causal information. I don't think electron's spinning faster-than-light can be harnessed to breach that limit.  After all, we are familiar with many superluminal but non-causal events: Isn't it true, for example, that quantum entanglement can travel faster than light? Or that there are galaxies in our universe that are receding from us superluminally?

Having presented my perspective on quantum spin,  I would like to now go one step further and ask what the primal origin, the cause or the source of this, fundamentally two-valued, spin is, which, one has to note, is possessed universally by all elementary particles.

Again, why is it that it will be either parallel or antiparallel to a given measurement axis? How is possible that all the fundamental particles have the same property, which never dissipates?

My answer to these questions is to do with my cosmological model that unifies and explains, in one stroke, both the dark energy and dark matter, namely the Big Spin. As those of you who have read my two papers (see arXiv.org) on the topic, and a blog post here, will recall that I have proposed a globally rotating space-time model, that I call the Big Spin, which is a natural cause of the early cosmic inflation, and the relatively recent accelerated expansion of the universe and the galaxy rotation curve anomalies.

I hereby do posit that, in addition to being a strong and natural candidate to explain our outstanding dark energy and dark matter dual problems, a Big-Spin model does also naturally explain the origin of "intrinsic" angular momentum of elementary particles. That is because these particles at the initial singularity started to spin with a gargantuan primordial angular momentum of the Big Spin, not Big Bang!, with superluminal rotation speeds. As the universe expanded, the spin orientations  got thermalized and hence the current two-valued, clockwise-counterclockwise characteristics.

Posted by Serkan Zorba at 12:25 AM No comments:

Western Media Awash in Disinformation and Hogwash about Turkey

As someone originally from Turkey (of Kurdish background) who follows the international news fairly closely, I have been particularly alarmed by the level of unfair and grossly inaccurate journalism vis-a-vis Turkey, post-Arab Spring.

Here is a country that----under Erdogan's leadership----managed to turn its past economic and democratic dismal-self around remarkably in the last decade or so, and became, for the last couple of years, perhaps the most humanitarian of all governments, by allowing, and taking care of, some 3 million Syrian and Iraqi (Arabs, Kurds, Yezidis, Christians etc.) refugees  into its territory.

But according to the most Western media, Turkey seems to be a horrible place where journalists are jailed and minorities are oppressed.  I urge you to investigate all these claims, looking at the arguments from both sides, not just the smug claims made by some in the Western media. For example, many of the journalists or people in question would face similar, if not worse, litigations in the West (Judith Miller and Edward Snowden come to mind).

Furthermore, you need to know the culture of the country itself to make sense of what is happening there. Some people (in Turkey and the West) think that insulting and defaming people's reputation publicly is part of freedom of speech. How can that be? Why do we have defamation laws, for instance in the West, available to anyone who feel their reputation is publicly tarnished?

One gets a sense that the pre-Erdogan Turkey was like the proverbial Switzerland, but Erdogan took all that away. Whereas those of us with some fair sense of judgement who happened to have lived in pre-Erdogan Turkey, knows very well that it was a God-forsaken country both economically and democratically. It would be an insult to human intelligence to even compare today's Turkey to that of old Turkey. But, alas, that is exactly what the Western media is doing.

Posted by Serkan Zorba at 1:31 AM No comments:

My students' view of me

My Islamicity and Iviews articles: